My Daniel is a sensory seeker. That means that he gets anxious when there is not enough sensory input. This anxiety can lead to epic meltdowns, tantrums and end-of-the-world style behavior.

He is oral seeking, so usually a little run around the mouth with his battery powered toothbrush will help give him the input he needs. Not so today.

We started out the day well enough, but as the day wore on we saw more and more "fish hooking." It's just what it sounds like, Daniel hooks either his thumb or any finger into the corner of his mouth, and pulls. He has stretched his mouth wide in both directions, at times nearly splitting his lips. It's scary to watch, no mother wants to see their child hurting. It's especially painful when your child deals with stress by hurting himself. 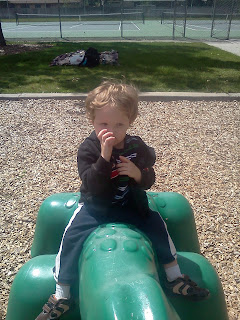 (Picture: Daniel "fish hooking")
I brought out the toothbrush, but it was just a downward spiral. Maybe he is getting a little cold, or his allergies are bothering him. He started coughing this morning, too. It's almost impossible to know what or why my little guy overloads or underloads. Sometimes it's a trip to the store (overload). Sometimes it's several days of rain and cabin fever (underload). But too often it's nothing I can pinpoint, it just is.
We took Daniel to the park hoping the swings would help to calm him down a bit. He did enjoy the swings a lot. Then he wanted down to venture over to the slide.
When Daniel is like this he doesn't want to go anywhere alone. He operates on a very tight safety net of either me or Dad and will outright refuse to do things that he wouldn't think twice about on any other day. Today it was going up stairs to the slide. Then it was walking across the bridge. Then it was going down the slide. I had to go down first before he would even entertain the idea.
Finally, there was a platform next to the slide that had a fire pole on one side, bars with a steering wheel on the other and an iron bar ladder on the third side. I tried to entice Daniel over by playing with the steering wheel. Soon he wanted to play too, but I had already gone down the slide. He got to he edge of the platform and just stopped, holding his hands out on all sides as if somehow the world was either caving in or falling away from him. I urged him forward, reminding him that he was safe, and he, very gingerly, walked forward to play with the steering wheel. He did this several times after this initial journey, but he would not let go of one hand-hold before taking hold of the steering wheel. I'm guessing this is part of his proprioceptive sensory challenges... or vestibular. Frankly it's hard to tell them apart. Not just by definition, but application in regard to Daniel.
All in all it was a good day, but a challenging one. The highlight was Daniel messing up the word 'knock.' He was saying "honk, honk, honk!" When Dad tried to correct him by saying "Na, na, Knock," Daniel repeated, "Nah, nah, HONK!"

He is frustrating. He is sometimes impossible to reason with, but he's my boy, and I can't help but love him and be proud of all the accomplishments he has made. His speech has come such a long way and I only see him making improvements in the future. He's certainly a persistent soul, that's for sure. 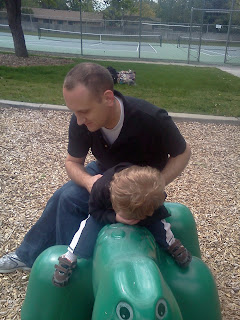 (Picture: This Daniel's meltdown. He covered his face with his hands, bent over and started crying and screaming. Poor kid. Our usual deep squeezes and chewy snacks just weren't working for him today. Finally I resorted to another staple, a thick smoothie in a straw cup. What a life saver ... the nap he had later helped as well).
Posted by Mother L at 7:00 PM

Add your two cents here. Have an idea for a post? Let me know. I welcome creative inspiration in all its forms. 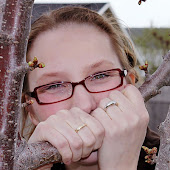 About the Blog Author

Hey there! I'm so glad you stopped by.

I'm a 26-year-old stay-at-home mother of 2, a full-time college student, and a member of the Church of Jesus Christ of Latter-Day Saints (Mormon). I love to cook, bake, and get crafty with homemade crafts. I am also addicted to photo editing and digital scrap booking.

I am the proud mother of a sensational little boy, Little D, who has Sensory Processing Disorder, Speech and communication delays and fine and gross motor delays. We are also looking into getting him fully evaluated for Autism Spectrum Disorder. My daughter, Little Sis, is an 18-month-old and has issues with acid reflux and sleeping troubles.

Thanks for coming, I hope you stay a while and leave a comment to say hello.